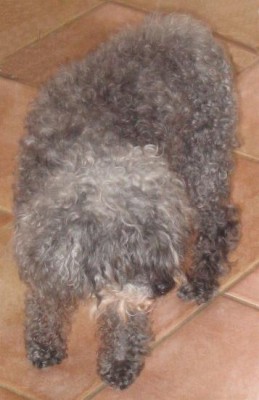 My dog and I were walking down the sidewalk as usual, her out in front leading the way, me working a little bit to keep up. Except for occasional times when she decided she just had to stop and sniff a fragrant tree, check out a suspicious walkway, or observe a patch of interesting grass, she went straight down the middle of the sidewalk.

Not bad when you consider that she’s 16, deaf to almost every sound, and nearly blind. No one looking at her as she heads down the street would ever suspect she has problems. She is and has always been an Alpha dog who believes the world belongs to her.

While we were walking this morning, it occurred to me to ask myself how it is that she can walk so confidently while I in a similar position would be afraid to leave the door to my house. I can think of a thousand problems that would arise – tripping over anything and everything, walking onto the street and getting hit by a car, falling over the curb, bumping into someone…. True, cement sidewalk feels very unlike soft grass, and it might be possible to stay on the walkway, but at best I would stumble along slowly, one hesitant step following another.

So how can she do it? Doesn’t she understand the dangers?

And then my son reminds me that in the past, the few times she has gotten out of our yard alone, she’s always gone to the front door and scratched to get in the house – very unlike her usual behaviour. And I understand. The reason she can walk quickly and confidently is because she knows she’s safe. There’s a leash that connects us.

Without the leash, she would be alone and fearful, even more so than she’s been when she got out alone before she began to have sight and hearing problems. But with the tension of the leash between us, she’s secure. She knows that I’m with her and that she’s safe.

And sure enough, more than ever before, I make sure she gets over curbs safely and doesn’t bump into a stray bike or something else that’s unexpectedly in her path. I have become her guide person as well as her security.

And I consider how the leash, which might seem to be a restraint, actually gives her freedom.