Although it happened years ago, I’ll never forget the Sunday morning our pastor gave away a quarter for his children’s story. 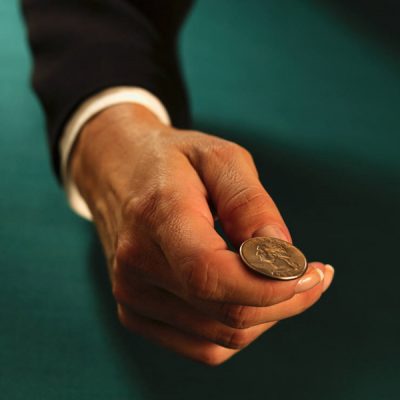 Our family was part of a small church plant meeting in a school gymnasium. At that point, there were only seven or eight young children. The pastor, an older man, always had a story for the children as part of the Sunday worship service.

This Sunday, the pastor took a shiny quarter out of his pocket and held it up for everyone to see. Then he said, “The first boy or girl who comes up here may have this quarter to keep.”

I glanced around. Each of the children was leaning forward, eyes fixed on the quarter. But not one of them stood up.

It was only a short walk from the rows of chairs to the podium set up near the gym wall, but apparently none of the children felt brave enough to walk up in front of everyone to get the quarter.

The pastor smiled. “I mean it,” he said. “The first child to come up here will get the quarter. There’s no trick.”

“Doesn’t anyone want this quarter?” He raised his eyebrows.

A long pause. A few stifled laughs from adults who didn’t have young children. Then, very slowly, my four-year-old son rose. Head down, eyes raised, he shuffled forward until he was a few feet from the pastor.

After studying the pastor for a moment, my son raised his hand, palm up, and waited.

The quarter was duly exchanged.

A small thank you and my son, now grinning, skipped back to his seat and sat, legs swinging, admiring the shiny new quarter.

The other children watched with envy.

The pastor proceeded to talk about how Christ is standing with a free gift held out for all who will come and get it, but how people are often afraid to take it. He said that those who don’t know Christ must be willing to step out in faith, just as my son had come up to get the quarter.

Not a bad object lesson. But not quite the one I would have chosen. You see, I knew something the pastor didn’t. I knew why my son had gone up.

It wasn’t that he was particularly brave. Nor was it that he had great faith in the pastor, though he liked him well enough. The real reason my son went up to get that precious quarter was because I, his mother, had whispered to him that it was okay to go. I had told him there was no trick, and he believed me. Why? Because he knew that I would never lie to him. He trusted me.

I’m sure my son, now a parent himself, has forgotten all about that quarter. But the object lesson is still etched clearly in my mind. Because that day, as I thought about my son’s trust in me, I realized that, as Christians, we have the same responsibility to non-Christians that we have to our children. We can’t expect non-believers to suddenly put their faith in a God they don’t know. Instead, they must first come to know and trust us—his children.

Once they’re certain that we really care about them, that we don’t have any tricks up our sleeves, and that we really do want what’s best for them, they’ll believe us when we tell them they need God.

And they’ll put their trust in God, not because they have great faith in him, but because we told them it was safe.

And, like my son, they’ll return to us with joy, having discovered that their trust wasn’t misplaced.