When you put up a website, in essence, it represents you. People who don’t know you personally see your site and come away with a lasting impression.

For years, I’ve been trying to find a look and tag-line for my website that feels right to me. It’s not enough to give my name and what I do or even show the covers of my books. You need a single focus that ties everything you are together.

If you look for a common theme from all of these, it’s faith.

Basically, what I want to do is help you (my readers) trust God and obey his call on your life, so that you can become everything God created you to be. Except that’s a paragraph, and it’s not catchy, and you likely won’t remember it. So I’ve been stuck in a vortex of words with none of them working.

Last week, while staring at my website header, I remembered Norman Rohrer’s short phrase, “I Fire Writers,” which I first saw in ads in various magazines over 40 years ago and still remember.

I asked God to give me a short phrase like that.

The next day, while on a short walk in our neighbourhood, admiring the colourful new flowers, not even thinking about this, three words suddenly popped into my head. “Inspired by Noah.”

I immediately recognized this as an appropriate tag-line.

Why? Because if anyone in the Bible had faith, it was Noah. And by obeying God, Noah saved not only himself and his family, but everyone who has descended from them, and the animals God made and Adam named. The last two steps of creation.

Humankind had become completely disobedient to God, except for one man, Noah. God told Noah to build an ark. Noah, who lived in a desert. Who, with his sons, continued building that enormous boat for years and years. And they were the only people who survived the flood.

Hebrews 11 lists examples of people who had amazing faith. The very first name on that list is that of Noah.

“Without faith no one can please God. Anyone who comes to God must believe that he is real and that he rewards those who truly want to find him. It was by faith that Noah heard God’s warnings about things he could not yet see. He obeyed God and built a large boat to save his family. By his faith, Noah showed that the world was wrong, and he became one of those who are made right with God through faith.” Hebrews 11:6-7 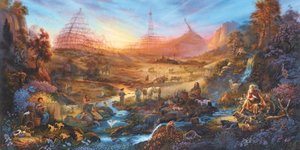 I came home from my walk and looked at the large 24 x 42 inch picture hanging in our living room.

I saw the picture about eight years ago at an outlet mall where I was browsing. It’s called “The Commission” and is one of a series of paintings on the life of Noah by artist Tom duBois.

The moment I saw it, I knew I had to buy it. Fortunately, the price wasn’t too bad. I needed it because it was a visual reminder of what I felt we were doing by working day and night creating The Word Guild; building something much bigger than the individuals involved, with no idea whether we would be successful or not, and no idea what might happen in the future. All I knew was that God had told me to do this, just as he’d told Noah to build that ark.

Every time I look at that picture, I have a little more confidence that as long as I obey God, even when I feel confused and in the dark about why I’m doing what I’m doing, it will be worth it in the end.

Some of you know that my life is a story of God’s faithfulness. You know that God has been my best friend since I was very young, even though my parents didn’t understand that God could be a friend.

My dad had an older sister whose name was Margaret. Aunt Margaret never had children, but she taught Sunday School. One of my favourite things to do when we visited her house was to play with the sets of flannel-graph figures she kept on a high shelf in her small bedroom closet. She often got them down and let me play with them by myself on her bed.

My favourite story was that of Noah. Of course, I liked it because of all the animals, but I also loved it because of the fact that God kept his promise. He asked Noah to do something that must have seemed just as ridiculous to Noah as to everyone else. And yet Noah did it. And God followed through and did what he had said he would. And only Noah and his family and the mammals and birds on the ark survived.

If there’s anyone in the Bible I want to be like, it’s Noah. I want to trust God so much that I’ll do whatever he asks me without stopping to question or argue or barter.

There’s one final reason the tag-line “Inspired by Noah” resonates with me.

If you look closely at the logo we chose to use for our publishing company, That’s Life! Communications, when we started it in 2000, you’ll see that the dove in it is holding a small olive branch. It’s the dove returning to Noah to tell him there’s new growth again on the earth—new life. Almost time for the ark to land.

But that’s not the only change.

As I move away more and more into my own writing, my plan is to make this website more active. I want to blog more, interact with people more, and find new ways to help people have the courage to trust God and allow him to mold them into everything he created them to be; to, like me, be inspired by Noah.